As part of our annual Recreational Outing and Picnic, this time we went to Royal Manas National Park located in the Southern Central Region of the country via the Tsirang - Gelephu Highway.

We were quite a large group (21 of us and some of us were traveling to this region for the first time including me). We boarded two buses with all our supplies and groceries, utensils and camping equipments to last for a week. So, that we could cook, eat and camp where ever it was possible.


Day 1: Gelephu
We started our journey early in the morning on the 8th of Jan. 2014 and reached Gelephu around 6 pm.

We went for shopping in the Gelephu Town as we needed some extra supplies to last for all of us and had an early dinner because the next day we will be heading towards a place called Gomphu.


Day 2: Gomphu
The road to Gomphu was very narrow and steep. But luckily no vehicles ply on those roads.

We reached Gomphu Eco Lodge & camping site in the evening. It was very cold there.

The small eco lodge is owned & managed by the Gomphu Community. Since, the rooms could hardly accommodate us, some of us had to sleep in the tents. It was fun and interesting there. They had already made preparations for a bonfire. 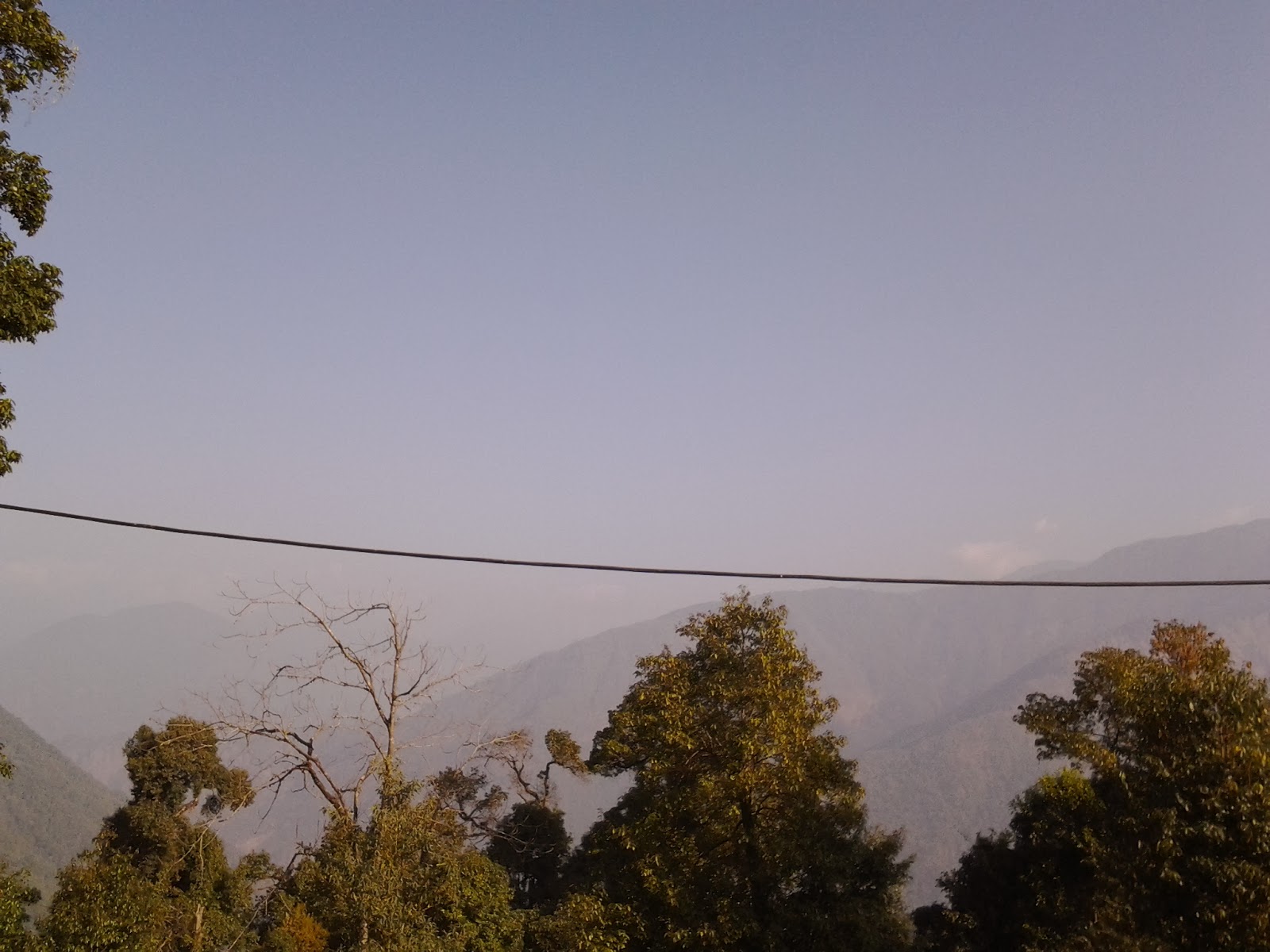 The never ending winding roads were very tiring. However, the scenic beauty of the place awaked us. There is a large and beautiful twin waterfall on the way to Panbang. It was warm there. We stopped there to take pictures. 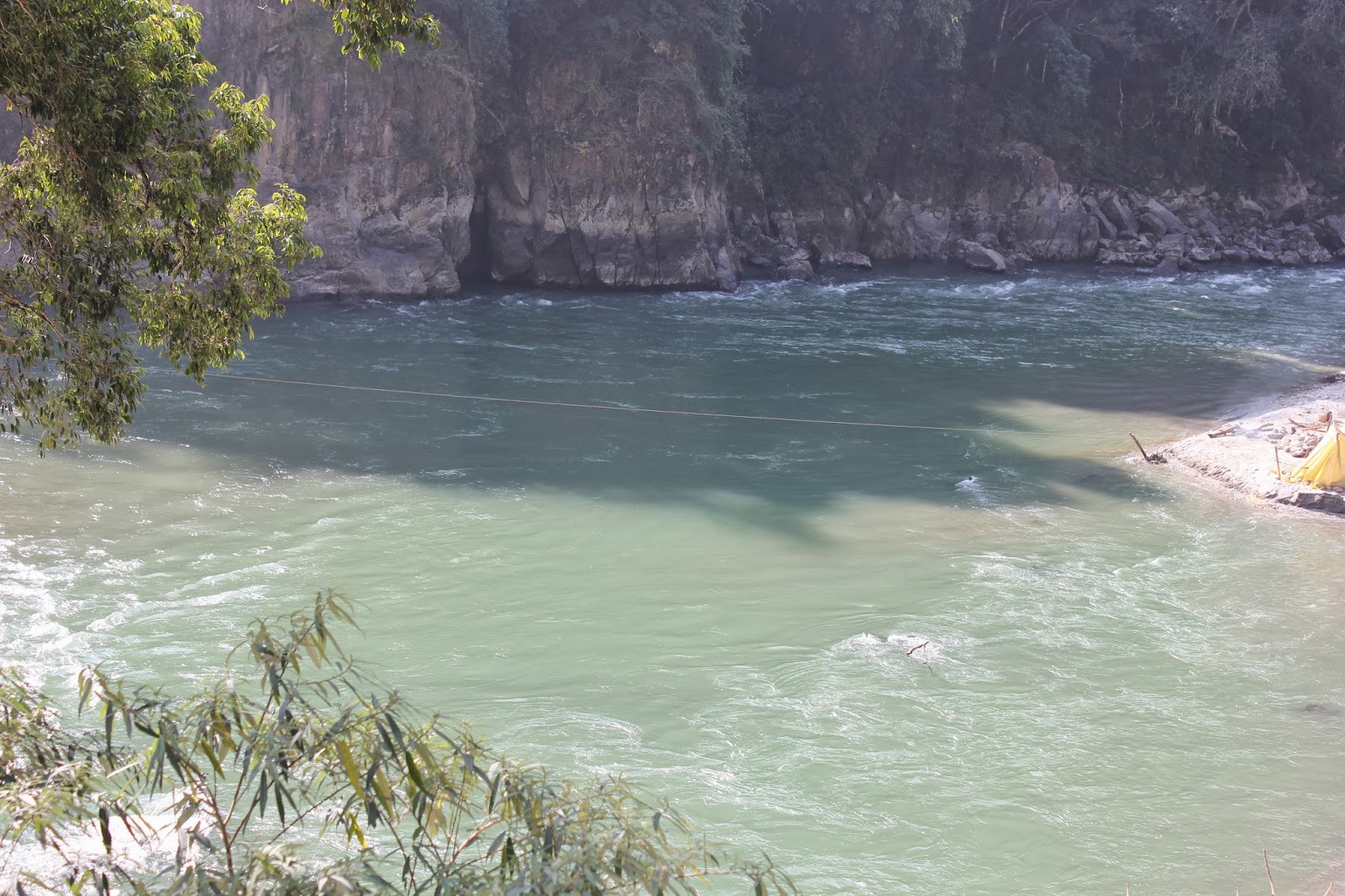 Actually in our itenary, we were to stop for the night at Panbang Eco Lodge. However, when we reached there it was already occupied by some guest. So, we looked for two other lodges but it was not possible to stay there.

Day 3: Camping on the Bank of the River Manas
So, we camped on the bank of Manas River. It was very windy at night.

I felt as if the wind will blow our tents at night. But nothing as such happened.

Day 4: RMNP
It was so windy on the morning, that we decided to go straight to the park area.

Finally on the fourth morning of our trip, we crossed the river on the boat to reach the Park area.


There is a basketball court, football and volleyball ground. It is so beautiful on the park. 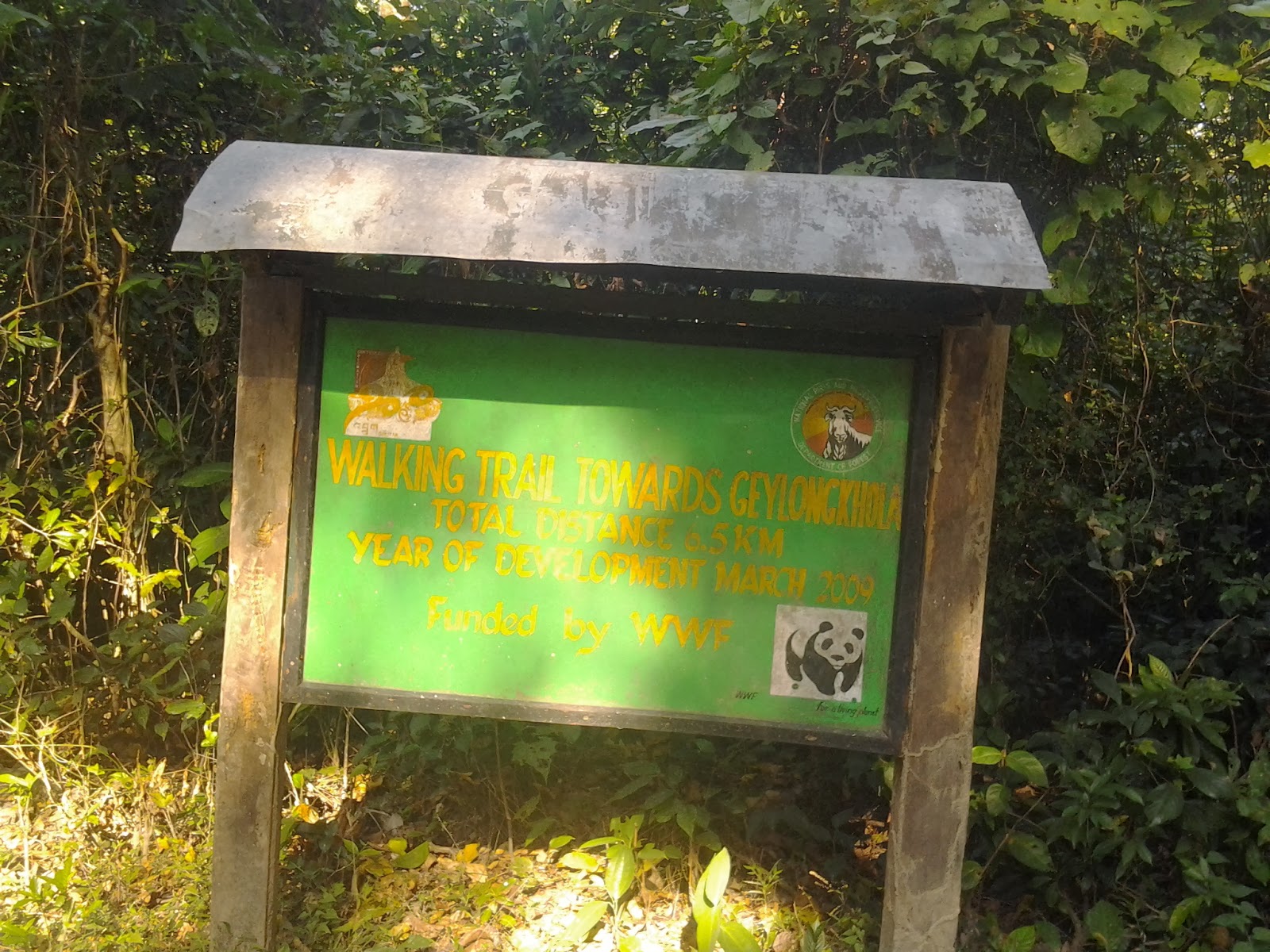 On the first day @ RMNP some of us   rode on the tamed elephants. There were only three elephants. 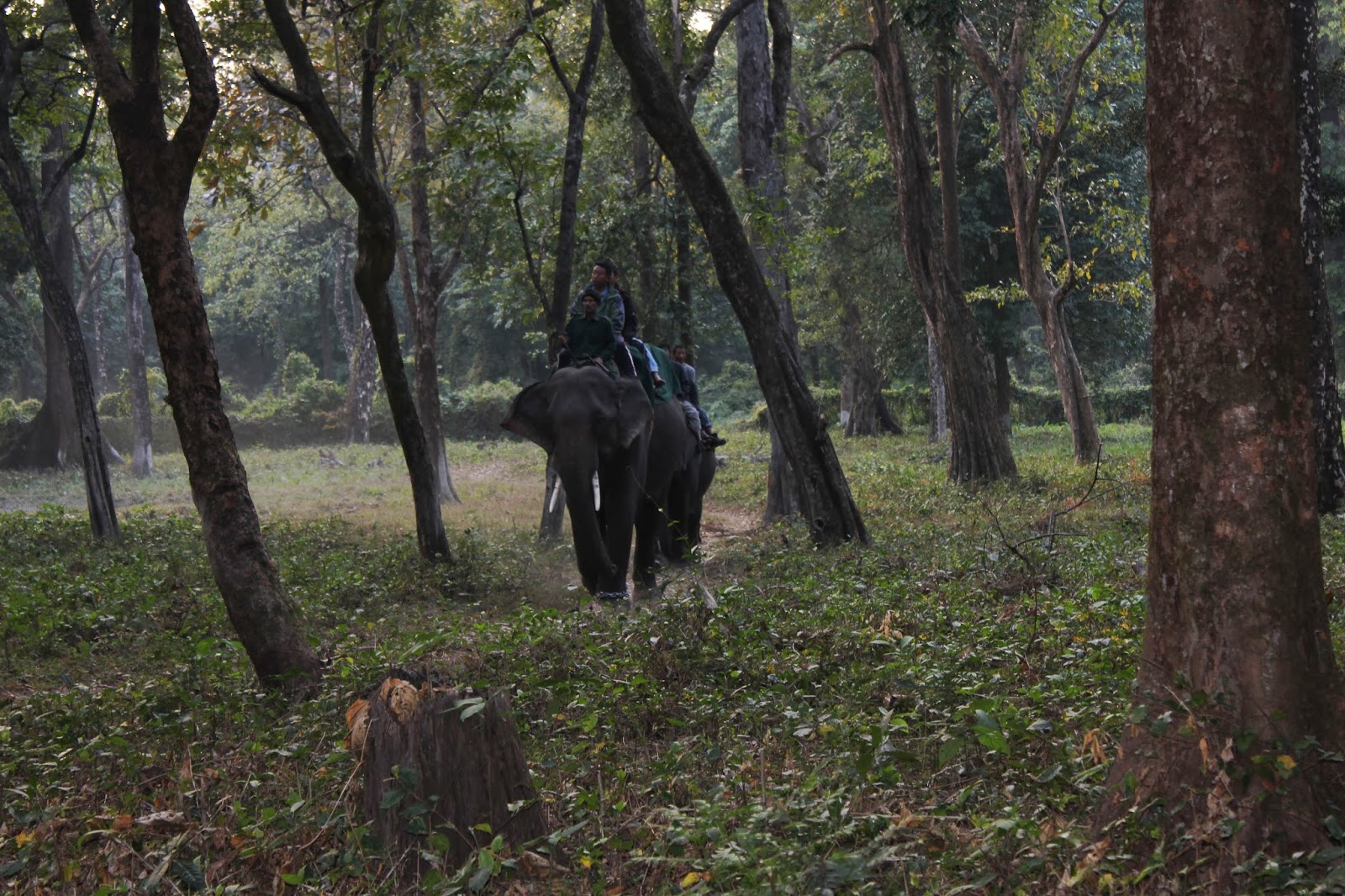 Day 5: @ RMNP
On our second morning at the park, some of us went for Bird Watching. I spotted a Collared Owlet. There are plenty of Rufous Hornbill and Parakeets.

We went hiking to a place called Special Thang after breakfast.

There were lots of Indian Gooseberry trees.

Unfortunately, we weren't lucky enough to spot any animals. On our way back and forth we saw some footprints of tigers and leopards.

It is estimated that there are only 35 tigers in the Manas Region.
The Indian side of the Manas is a World Heritage Site for conserving tigers.


We spotted a barking deer running from one side of the dry river to the other end.

The name of the dry river is Geylongkhola.

After hiking for nearly two hours, we reached the Watch Tower.

However, there was nothing to see. May be the wild animals were scared by our large group. 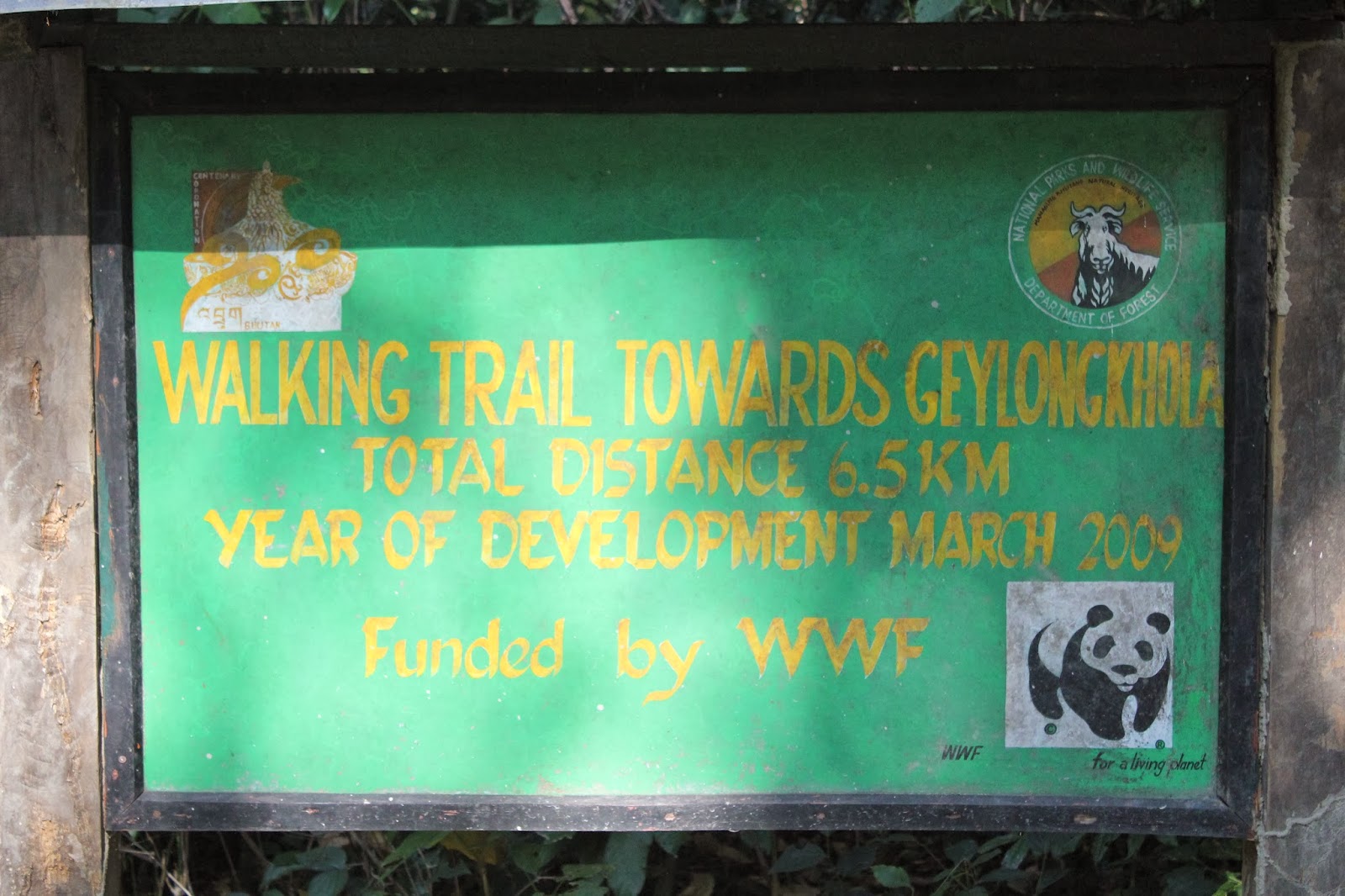 On our way back, we spoted several Golden Langurs (endangered species) clinging from one branch to another.


And, saw some jungle fowl.

When we reached our camp site, i were so tired that i directly went to sleep. 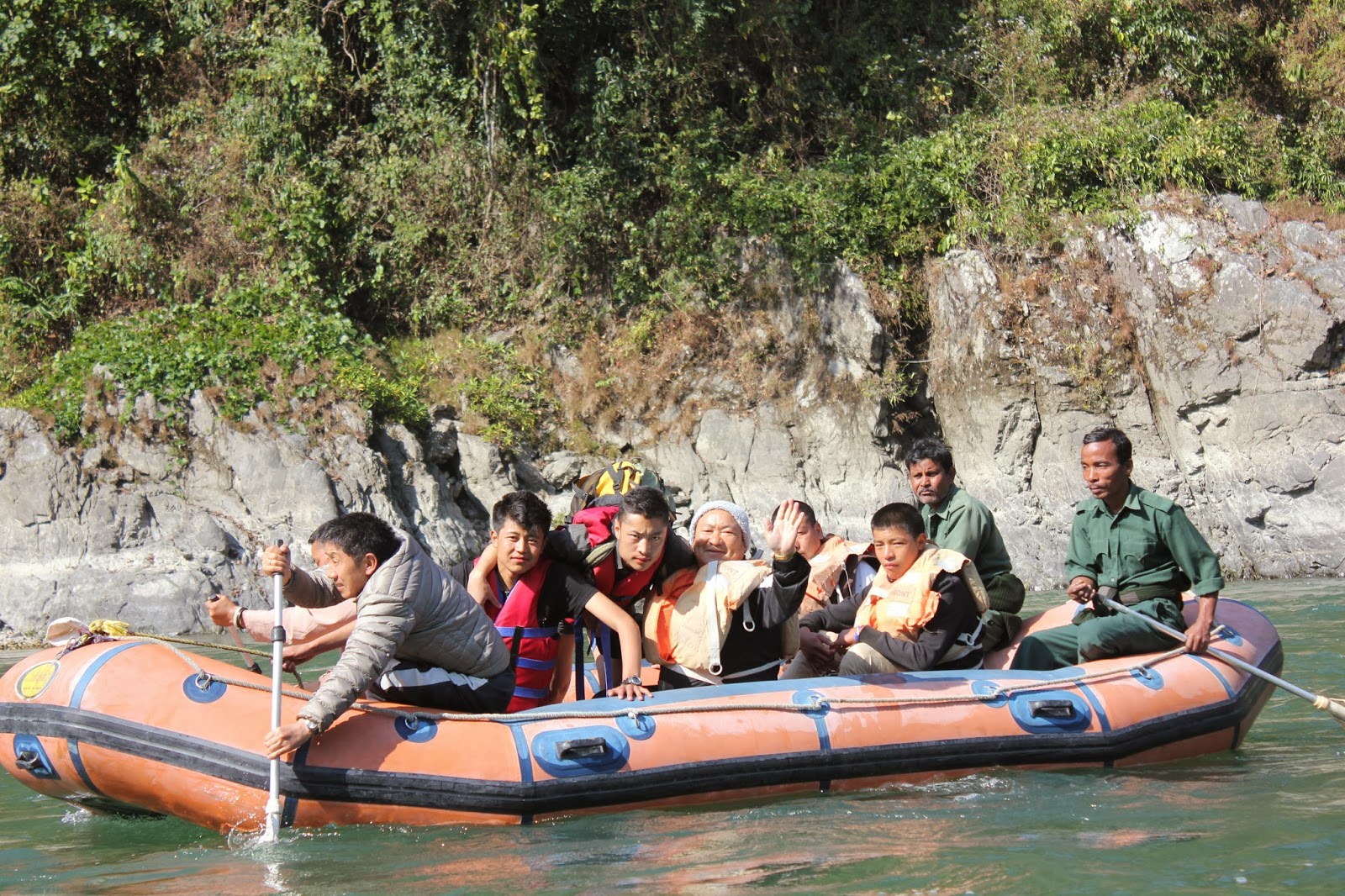 On our third day @ RMNP, we went for river rafting..

This park has only recently been opened to the public and offers  thousands of animal and plant species, many of which are globally endangered, it is not only the most diverse protected area in the Kingdom but also noted as one of the world’s biologically outstanding parks.


Lying in south central Bhutan, Manas is connected at the southern border with India’s Manas Tiger Reserve, a World Heritage Site. To the north it borders the Jigme Singye Wangchuck National Park. Royal Manas was designated a wildlife sanctuary in 1966 making it Bhutan’s oldest protected area. The area was upgraded to a National Park in 1993.

There are wide climate variations in Royal Manas. The May-September monsoons bring up to 5,000mm of rain. Rainfall is negligible in winter and the climate is extremely pleasant from November till March.
Manas is also extremely rich in wildlife species, including the highly endangered Royal Bengal tiger, Asian elephant, greater one-horned rhinoceros, clouded leopard, Himalayan black bear, gangetic dolphin and pangolin. Found virtually nowhere else in the world is the especially rare golden langur, a primate of extraordinary grace and beauty with its long, silky blond fur.

More than 365 species of birds have been officially recorded in Royal Manas National Park with an additional 200 believed to be in residence. Species found here include the globally threatened rufous-necked hornbill, Pallas fishing eagle, great white-bellied heron, spotted wren-babbler, blue-headed rock thrush and emerald cuckoo. Many of the park’s more than 900 types of plants have commercial, medicinal, traditional and religious significance.