I want to share this message written by (i dont know the exact source, once i know then i will definitely name him here), on our king's 34th Birth Anniversary. I have read this a long time ago and hope you would like to read. It a simple but heart touching message. And, i would like to wish our king many many happy returns of the day :). You are the greatest inspiration for us and we will always love you. Once again, happy birthday!!


We the people of Bhutan have always felt the love of our King. We have always been inspired by His Majesty’s “Loving Kindness.” His Majesty Jigme Khesar Namgyel Wangchuk began His reign by declaring to the people: “I will never rule you as a King. I will protect you as a parent, care for you as a brother, and serve you as a son.”

Never ruling you as a King, His Majesty spends majority of the time walking to remote villages of Bhutan (names of villages that majority of Bhutanese people have even not heard of) from Gortsham village to Shillingtoe village to Samrang village. I remember His Majesty once said, “I cannot think straight in the capital Thimphu, I am happiest when I am with my people in the villages, I can look at their faces or remember their faces when I make important decisions that affect their lives.” When in Thimphu, His Majesty spends most of the time sitting down with the people from taxi drivers to civil servants to youth. 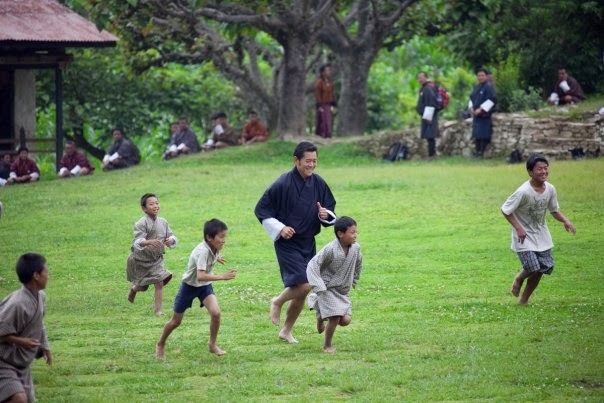 Protecting you as a parent, His Majesty adopted thousands of needy students across the country as Gyalpoi Tozey (which literally means those who share King’s food) giving not just financial support but love and care as a parent lifting them up with human dignity. Today being a Gyalpoi Tozey is a rare honor because you are treated as King’s child with “Loving Kindness.” Some of Gyalpoi Tozeys have already graduated with impressive degrees such as civil engineering, business administration, information technology, and so on from colleges both from abroad and Bhutan. Our King has given them rare opportunity to prove that “I may be poor but I’m not poor in brain.” By taking care of them as a parent, these vulnerable children never felt like poor children because His Majesty would personally send them pocket money in an envelope. For example, once when there was huge flood in Bangkok, students of Rangsit University were evacuated to different locations in Bangkok. I met some of Gyalpoi Tozeys studying at Rangsit University. “His Majesty has sent us a surprise – extra pocket money and affectionately told us to go shopping to relieve our stress from flood worries as the university is closed ... we are all so happy,” they told me.

Caring for you as a brother, His Majesty has granted countless individual audiences to those embarking on new journey of further studies or other endeavours. Those who received audience are always inspired. “It was really a life changing experience,” said Karma Wangchuk. “His Majesty’s words were like blessings that would lead me to be amongst the best,” said Renuka Chettri. “It really did touch my heart,” said Kezang Tshomo. “Inspiring, enlightening, moving and encouraging,” said Kinley Wangdi. “I do feel proud to be a citizen of this country,” said Kinley Dema. “It was a very inspiring and humbling experience, and I was pleasantly surprised and happy that His Majesty remembered an old schoolmate,” said Sharda Rai.

Serving you as a son, His Majesty is taking care of thousands of vulnerable elderly citizens across the country who have no one to care for them - from Amma Tashi Zangmo in Durung village to Agay Tandin in Jang village to Angay Dhan Maya Rai in Logchina village. Massive land Kidu initiative of our King currently happening is also because His Majesty believes that land is best kept in the hands of our people.

Thus, we the people of Bhutan have always been inspired by our King’s “Loving Kindness,” but I have always wondered with curiosity, like a little child, where do our King draw His inspiration for “Loving Kindness.” Then one day what I saw on our King’s study table inspired me (and I’m sure now you too) beyond imagination. It’s a rare treasure. It’s a handwritten note from our Royal Angay (Grandmother) Ashi Kezang Choden Wangchuk to His Majesty the King in 2006 when His Majesty the 4th King handed over the country to His Majesty the King, in an unprecedented and unexpected surprise move, in peaceful and quiet transition. Since I was inspired beyond imagination, I have memorized those beautiful words of wisdom, forever, in my heart. It’s a rare treasure that would inspire every Bhutanese and beyond – beauty lies in its simplicity and profoundness in being human being first.

So here it is, for your inspiration:

The Buddha once said to King Prasanjit

Oh, Great King, your works are vast and numerous

Whether you are seated, whether you march, eat or are in Repose

May all your Acts, Laws, and Judgements

Be inspired by “Loving Kindness”

In this way, you confer unlimited benefits on your subjects
And collect unlimited merits for yourself.

With all my love and prayers for you.