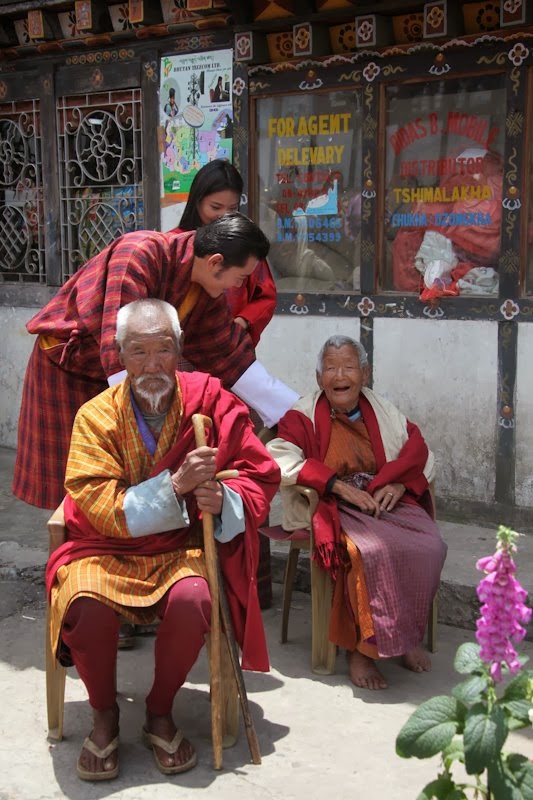 When His Majesty the King begins a journey across the country, the people of the court do not try to estimate when they will arrive at a destination.

The purpose of the travel is not to arrive, but to organise what is perhaps the most unique royal court in the world – a mobile one.  It is not uncommon to reach the end of the journey well after midnight.

The mobile royal court begins as His Majesty’s motorcade starts on what is certain to be a long journey.  But in this court, people do not travel for days to receive an audience with their King – the King travels to his people.

On dusty farm roads, in lush valleys, in small towns and near villages perched on slopes, His Majesty’s car stops for whoever wishes to meet their King.  His Majesty stops for every single man, woman and child, at any time of the day or night.

Sometimes people approach His Majesty with their difficulties; other times they just want to greet their King or welcome His Majesty into their villages.

In case of appellants, each appeal is heard carefully.  Often, a royal command is issued immediately to the gyalpoi zimpon.  At other times, His Majesty commands that the issue be studied further.

Following the audience, the zimpon collects the zhutsi, or makes note of the cases, and begins to carefully register each one while still on the road.  Phone numbers are noted and calls are made.  Some villagers come without any papers and others don’t have mobile phones.  Many cannot remember their phone numbers.  This calls for the ingenuity to adapt to such situations – the zimpon uses the appellant’s phone to call himself, or finds someone close to the person, who has a phone.  Applications are written out on the spot.  The process of resolving issues has already begun, minutes before His Majesty’s motorcade has stopped for the next person.

The beauty of this mobile court is that it takes His Majesty’s kidu to everyone, and excludes no one.  It allows unprecedented and unanticipated problems to be dealt with, and ensures that His Majesty’s kidu takes care of people, when there isn’t a system in place to do so.

At Thungdari, in Dramitse, Mongar, a group of students have a special appeal.  The 13 students live in Rolong, and go to school in Trashigang.  They want a bus to take them to school every day.

Two sets of wheelchairs are immediately granted to the women.  A medical team, which is part of the entourage, looks at the children.  The team travels with His Majesty, following His Majesty’s footsteps into the most remote pockets of the country, and administering healthcare wherever necessary.  Mobile clinics are set up on the spot, and a variety of ailments that the villagers suffer from are treated.  This is not a one-time treatment – cases are referred, prescriptions are noted, and parcels of medicine are sent through gups until the treatment is complete.

At other times, people approach His Majesty, because they have heard of His Majesty’s visit, and wish to meet their King and Queen.

In a shaded corner of a forested area near Phanas, in Ngatshang, Mongar, 84-year old Ugyen Tenzin has been waiting patiently for His Majesty to arrive.  He tells His Majesty that he has only seen his King and Queen in Kupars, and he has walked for hours to meet Their Majesties.  It is a touching moment for those present to see the old hermit present Their Majesties a flower.

Straight-backed men wearing their Nyarey and antique medals proudly wait for His Majesty along the way.  Some of these ex-armed force personnel have served the Third King.  His Majesty knows most of them by name, and greets them warmly.

The journey has several detours, taking His Majesty along bumpy farm roads to nearby villages, where people have gathered in a lhakhang or a school.  The stops are numerous as well – often, His Majesty alights from the car and visits the people in their homes and shops.

At other places along the way, villagers set up tshogchang.  Sweet cypress and pine leaves are burned as incense, seats are decorated, and the best ara is brought out in ornate palangs.  The women sing songs as tshogchang is offered to welcome Their Majesties.  With the ara, they offer the humble produce from their farms – boiled eggs and oranges.

These are cherished meetings, and the conversations are intimate.  His Majesty inquires about their families and work; the people talk about their lives and difficulties.  Because these are regular meetings, many faces are familiar to His Majesty.  Children have grown up, young people have married, and pregnant women have given birth to red-cheeked babies that they now carry on their backs.

There is a festive mood at these large gatherings.  His Majesty shares jokes, and often asks the officials of the entourage to sing and dance to entertain the people, who have been waiting for hours.
After every meeting, after some questions and advice, His Majesty always tells the people that he will meet them again.

There is no lunch arrangement along the way.  Everyone in the entourage carries lunchboxes, and eats wherever lunchtime finds them.  It is a surprise for government officials, who have been invited to join the entourage, to find no grand lunch for His Majesty on these journeys.  Often, His Majesty will eat at a small restaurant, where buses stop on the highway for lunch.

As the slow journey nears its end, people set up bonfires to keep warm, as they continue to wait in the dark.  The cold, the occasional rain, and even snow, are not enough to send them back to their homes.

In Mongar, after more than 8 hours of travelling from Trashigang (a journey that usually takes 3 hours), His Majesty greets the people gathered in the town square with the same energy as at the beginning of this journey.  More than an hour is spent in conversations, and the dark and cold bothers no one.  The scene may evoke nostalgic memories – a similar mood prevailed here when His Majesty graced the town just before the Royal Wedding.  The torrential rain that poured that day was as unsuccessful in dampening spirits as the late hour is now.

The mobile royal court has no set working hours.  It accommodates all those who approach.

Contributed by  Dipika Chhetri.
Dipika serves in the Royal Office for Media, and had the privilege of being part of the royal entourage on His Majesty’s recent tour to Mongar, Trashigang and Trashiyangtse from January 27 to February 17, 2014.
(Published in Kuensel dated 21.02.2014)
Posted by Subba Shan at 3:05 PM